Awareness programme on Alcohol and Drug abuse was organized for SHG members in Myladumparai, Theni District on 25.02.2015, by Trishul-Integrated Rehabilitation Centre for Addiction, a project of M.S.Chellamuthu Trust. The main focus of the programme was to create awareness among the SHG members because that specific regional area was found to be high on people consuming alcohol & Cannabis according to our survey done there. So there is an urgency and time felt need for the thriving problem for immediate attention among the people regarding the ill effects of addictive substances. The World Vision, India, who are already rendering other services in the area had joined hands with MSCTRF to provide mental health expertise specifically.
About 130 members belonging to SHG groups had attended the program. Resource person, Mr.M.Ramu, the Team leader of MSCTRF, spoke about various issues such as: origin, causes and pathways to addiction, misconceptions about drugs and the lure of pleasure seeking among the younger generation particularly school and college students and also daily workers. He also highlighted the potential risk of abuse of medically used prescription drugs for psychological & physical problems and the consequent damages caused by their addiction. Mr.A.Jeyakumar, Social worker of MSCTRF, spoke about various stages of addiction, the multitude of drug substances, its effects and how it destroys life.
Awareness about issues related to addiction was followed by awareness regarding the mental health services available for such problems such as Trishul. 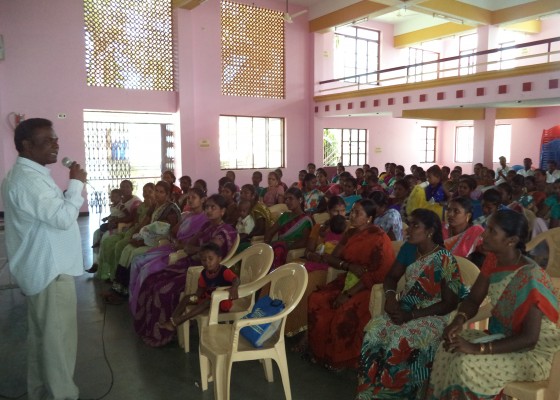